The 2014 ITM Colloquium (24-27 November 2014, Antwerp) brought together over 240 researchers from 60 countries to discuss how the collaboration of social scientists with other health researchers advances global health. They explored ways towards a more holistic evidence base for the control and elimination of poverty-related diseases.

“The degree to which people accept and take up biomedical interventions determines to a large extent whether these interventions will be successful, ” explained Prof. Koen Peeters, Head of ITM’s Unit of Medical Anthropology.

The degree to which people accept and take up biomedical interventions determines to a large extent whether these interventions will be successful.

Nevertheless, the evidence base of most health interventions still lacks the contribution of social science research. Typically, global health programmes are designed as a set of standardised strategies with limited regard to highly variable contextual factors, including how people at the receiving end interpret and act upon health and illness. Failure to address such issues may even compromise the strategy itself, as is seen in the spread of antibiotic resistance due to inadequate prescription and consumption. 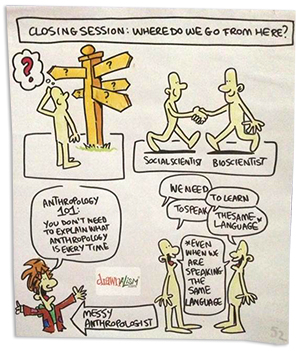 Alex Hughes made a set of live drawings, capturing the essence of the conference presentations in 52 cartoons.

The colloquium opened with a session on the ongoing Ebola epidemic in West Africa. Prof. Jean-Jacques Muyembe of the Congolese Institut National de Recherche Biomédicale (INRB) explained how local socio-cultural practices, such as burial ceremonies, play a role in spreading the virus. A longstanding partner of ITM, Prof. Muyembe was one of the first to arrive in Yambuku, Democratic Republic of the Congo, during the first-ever recorded Ebola outbreak in 1976.

Researchers also discussed how to cross disciplinary boundaries, using insights from both the social and biomedical sciences to develop a more effective approach to disease elimination. They also looked at research ethics, working with communities and the social lives of medicines. The latter session explored the meanings people and health professionals attribute to medicines and under which conditions they are exchanged and dispensed.

A general conclusion after four days of meetings in Antwerp was that biomedical and social scientists need to see eye to eye and speak the same language. “Social sciences should not be an add-on, but an integral part of global health strategies,” said Dr. Pierre Lefèvre who coordinated the organisation of the conference with Prof. Peeters.

The 56th ITM colloquium was supported by the Belgian Development Cooperation and organised by ITM’s Department of Public Health in collaboration with the University of Amsterdam, University of Montreal, Imperial College London, the London School of Hygiene and Tropical Medicine and Nagasaki University.