For the first time ever, ITM has mapped the spread of HIV among Sub-Saharan African Migrants (SAM) in the city of Antwerp, advancing more targeted HIV prevention.

Until now, little was known about the HIV epidemic among the Belgian SAM communities, which hindered the development of tailored and targeted HIV prevention for these groups. To bridge this knowledge gap, ITM researchers from the Department of Public Health launched the TOGETHER Project, with the support of the Flemish Fund for Scientific Research on AIDS. In close collaboration with the SAM communities, ITM researchers studied the HIV epidemic among Antwerp’s migrants of Sub-Saharan African origin.

They visited African churches, hair salons, bars, etc. and took part in community events. They were able to carry out an electronic questionnaire and take a saliva sample from a total of 744 SAM. This oral fluid was sent to ITM’s AIDS Reference Laboratory for analysis. From this, the researchers were able to deduce that 4.6% of SAM migrants in the city of Antwerp are HIV positive. These results are in line with the HIV epidemic in Sub-Saharan Africa where women (6.1%) are more affected than men (3%).

Notably, half of the participants said that they were unaware of their HIV status. It has been documented within these particular African groups that members tend to find partners within their own community, which increases the relative weight of the overall HIV epidemic among these populations. The more HIV positive people there are in a community, the higher the chance of infection. In addition, risk of acquiring HIV is also associated with difficult living conditions.

If you are vulnerable and dependent, you may not always be able to make conscious choices about your sexual behaviour. It might not be obvious that you have the right to refuse sex or insist on the use of a condom.

The importance of HIV testing 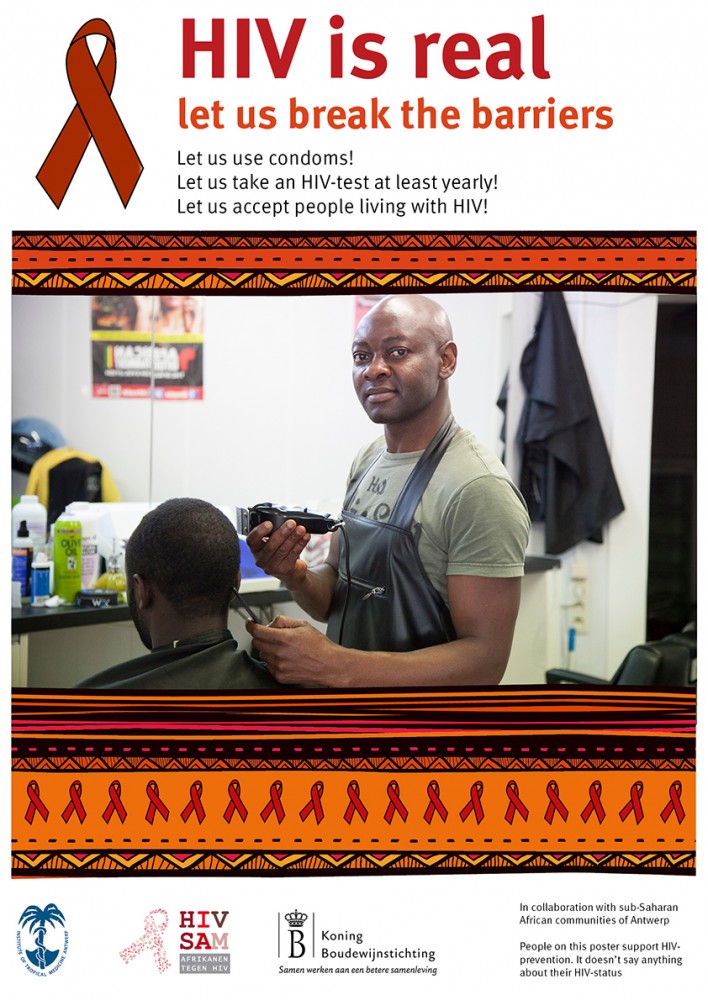 The study showed that 71% of participants was, at some point, tested for HIV; 40% had even done so in the past year. However, these individuals were mostly people with low risk behaviour, indicating that high testing coverage does not necessarily mean that high-risk groups are also being reached.

Since 1996, ITM’s HIV/SAM project works closely with SAM African community leaders to promote HIV testing in a culturally appropriate way and will now intensify its efforts based on the results of the study.

However, to more effectively decrease the burden of HIV on these communities, general practitioners should also become more actively involved. They should propose an HIV test to their patients of Sub-Saharan African origin far more often than they do now. By working on both levels, the number of people unaware of their HIV status can be reduced and new infections prevented.

HIV testing also plays an important role in prevention, because people on antiretroviral medication are less likely to transmit the HIV virus. The study did not only generate scientific interest, it also boosted prevention among the communities as the high HIV prevalence which was unveiled, served as a wake-up call.

Many community members participated in brainstorming sessions on new HIV prevention activities, which resulted in a new campaign featuring community leaders, a song and even a radio show. Volunteers additionally received training on how to sensitise their community members about HIV.

In November 2014, the results of the study were presented during the BREACH symposium in Brussels along with the new national HIV figures. During World Aids Day (December 1st), ITM organised a conference on HIV and Sub-Saharan migrants where participants had a closer look at the study results via a mix of presentations, interactive sessions and discussions.